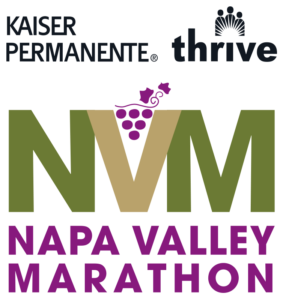 NAPA, Calif.—February 24, 2018—The Kaiser Permanente Napa Valley Marathon (KP-NVM) announced today that three-time women’s champion Devon Yanko will return to the world-renowned Napa Valley and highlight a compact, but determined, elite field on Sunday, March 4, 2018. Yanko (née Crosby-Helms), age 35, has competed four previous times on the race’s fast point-to-point 26.2-mile course, and emerged victorious in three of those instances (in 2007, 2012, and 2015) and placed third in 2014. Only one athlete to date has won NVM four times: Mary Coordt (Elk Grove, Calif.) who ran away with women’s victories in 1997, 2005, 2009, and 2010. Today, Coordt serves as KP-NVM’s Elite Athlete Recruiter and Coordinator.

Yanko’s winning time of 2 hours, 39 minutes, and 37 seconds in 2012 stands as the KP-NVM women’s course record. The superb KP-NVM men’s course record of 2:16:20 was set in 1987 by U.S. National Distance Running Hall of Fame member Dick Beardsley. KP-NVM’s scenic, gently-rolling course through Napa’s world-renowned wine producing region has stayed the same for the entire 39-year history of the event. The course is certified (for accurate distance) by USA Track & Field (the U.S. governing body for the sports of distance running, track and field, and race walking).

In her prolific 13-year racing career, Yanko estimates she has completed 36 marathons (26.2 miles) and 44 ultramarathons—races that range from 50 kilometers (323 miles) to 100 miles in distance. She has competed four times on the U.S. national 100 km team, including the gold medal winning women’s team at the 2009 100 km World Championships in Belgium organized by the International Association of Ultrarunners (IAU). Her personal record at the marathon distance is 2:38:55, a mark she recorded at the 2012 U.S. Olympic Marathon Trials race in Houston.

“I love the Napa Valley Marathon,” said Yanko who owns and operates M.H. Bread and Butter bakery in her hometown of San Anselmo, Calif. with her husband, Nathan. “I keep coming back because the course is awesome, the race is well organized and executed, and it’s just a great smaller race with a really big heart. I’ve had many great experiences there.

KP-NVM, which is widely known at the “biggest little race in the West,” limits entries to 3,000 participants, a number that is largely determined by the number of available hotel rooms in the world-renowned Napa Valley wine producing and tasting region.

Last March, Yanko suffered a foot injury which wasn’t fully diagnosed as a full fracture of her calcaneus (heel bone) until late October. She subsequently had foot surgery and resumed her running in December.

“NVM is really the first step in setting up my competitive year,” Yanko said about her 2018 racing campaign which will include a return trip to the prestigious Comrades Marathon (actually an 89 km ultra race) in South Africa in June, “I have to be in fast marathon shape for that one. Napa will help me get a read on how my post surgery training is going and how we attack the next stages of training going forward.”

Additional top female entrants for the 2018 KP-NVM include the following athletes:

Kristen Zaitz (37, Broomfield, Colo.) is a three-time U.S. Olympic Marathon Trials qualifier who owns a fast 2:32:38 personal best marathon, a performance she recorded while placing third at the 2014 California International Marathon in Sacramento. In 2010 she represented the U.S. at the IAAF World Half Marathon Championships and placed 39th in a very competitive international field with a time of 1:16:21. In addition, she has placed among the top 10 women nine times at U.S. National Road Racing Championships of various distances ranging from 10 km to 25 km. Today, Zaitz spends much of her time attending to her one-year-old daughter.

“I chose the Napa Valley Marathon because it gave me ample time after giving birth to start training and be consistent,” Zaitz said. “Being a mother has given me a more laid back approach and a better perspective on running and has forced me to be flexible with my training. My husband and I love Napa and know we can make a fun vacation out of it after the race. The course appeals to me.”

“I’ve chosen the Napa Valley Marathon because I’ve heard it’s fun, beautiful, and that the course plays well to ultrarunners with its rolling hills. I’m meeting friends from Boulder at the race,” said Scallon who moved from Boulder, Colo, to Santa Barbara a year ago.

Sarah Hallas (38, Cotati, Calif.) has competed in numerous marathons and half marathons and owns a personal best marathon of 2:52:11 which she recorded at the 2012 Santa Barbara Marathon. In 2005, she won the women’s race at the San Francisco Marathon in 2:56:55. Also in 2005, Hallas was the women’s runner-up at the Napa Valley Marathon recording a time of 2:57:42.

Danielle Quatrochi (41, Boulder, Colo.) refers to herself as a former aspiring U.S. Olympic Marathon Trials qualifier who was fortunate enough to qualify for the 2012 Trials by recording a 2:44:55 at the 2011 California International Marathon in Sacramento—a time that remains her all-time personal best. Following the 2012 Trials Quatrochi took an extended break from running to have her third child.

“Balancing motherhood, work, and training was a fulltime focus, but it was perfect at the time,” Quatrochi recalls. “Today I have a new sense of focus as a Master runner.”

Quatrochi decided to run the 2018 KP-NVM to support her girlfriend, Kristen Zaitz (see above), in her comeback marathon after having her first child.

“We were training partners for the 2012 Olympic Marathon Trials,” Quatrochi said. “And, the best part of running is friendship, so my focus has been just that. My goal is to run smooth and enjoy the Napa Valley since this is my first visit to the wine country.”

On the men’s side Vojta Ripa (28, Santa Rosa, Calif.) is the leading contender to ascend the victor’s stand. Ripa was born in the Czech Republic and came to the U.S. at the age of 10 with his mom and brother. His personal best marathon is 2:36:21, recorded at the 2016 California International Marathon.

“I chose Napa because I hear it’s a beautiful, fast course, and it’s right here near where I live,” Ripa said. “This will also be a special day for me because it will be my daughter’s first birthday and my wife and I are looking forward to celebrating it with her in gorgeous Napa.”

The 2018 Kaiser Permanente Napa Valley Marathon starts on Sunday, March 4th at 7:00 a.m. sharp in Calistoga on the Silverado Trail near the intersection of Rosedale Road. The 26.2-mile road course runs the length of the beautiful Silverado Trail and finishes at Vintage High School in north Napa. Top marathon finishers will arrive at the finish line at approximately 9:20 a.m.

The 2018 edition of KP-NVM has been selected by the Road Runners Club of America as its National Marathon Championship. Known as “the Biggest Little Marathon in the West,” the race rewards male and female open and masters winners with oversized bottles of wine etched with their championship accomplishments. The overall male and female winners of the race also receive their “weight in wine.” The marathon awards ceremony will begin at 12:30 p.m. in the Vintage High School quad.

KP-NVM’s companion race, the Kiwanis Club of Greater Napa 5K (3.1 miles), begins at Vintage High School at 8 a.m. and ends at the marathon finish line before the first marathoners arrive. 5K finishers are encouraged to stick around and watch the exciting marathon finish.

At the Napa Valley Marathon’s annual Marathon College, held the day before the race, a lineup of experts will discuss topics of interest for marathoners (and all runners). The Marathon College is scheduled for Saturday, March 3rd from 10 a.m. to approximately 4 p.m. at the Napa Valley Marriott Hotel & Spa. KP-NVM weekend also includes a Sports and Fitness Expo on Friday, March 2nd from 1 p.m. to 6 p.m. and Saturday, March 3rd from 9 a.m. to 5 p.m. at the Marriott. Both the Marathon College and Sports and Fitness Expo are free for the general public.

Here is the list of topics and presenters scheduled for the Marathon College on Saturday featuring legendary marathoner Joan Benoit Samuelson—the winner of the first-ever women’s Olympic marathon which took place at the 1984 Olympic Games in Los Angeles.

11:00 a.m. “How Building Core Strength Is the Key to Maximum Endurance” by Kaiser Permanente physical therapists.

Noon-1:30 p.m. Keynote Session: “A Conversation with Joanie,” a relaxed, intimate conversation with Joan Benoit-Samuelson who will be making her third visit to KP-NVM. Joe Henderson, former editor of Runner’s World and author of two dozen running books, once again serves as moderator for the noon keynote session.

1:30 p.m. “Secrets of Running the Kaiser Permanente Napa Valley Marathon Course.” A half-dozen KP-NVM veterans will give their insider advice on how to best maximize race performance on the Napa Valley course, one of the most beautiful in the world.

6:00 p.m. Marriott Pasta Feed. A special program by the Marathon College faculty will be presented between dinner and dessert. Pasta dinner tickets can be ordered with race entry, or can be purchased at race registration on race weekend. Seats are limited to 180 people. The cost is $40 per person.

Entry slots are still available for both the Kaiser Permanente Napa Valley Marathon and the companion Kiwanis Club of Greater Napa 5K Run. Online registration closes on Thursday, March 1, 2018 at 11:59 p.m. PST. After that, runners may enter in-person at the Sports and Fitness Expo on Friday, March 2nd from 1 p.m. to 6 p.m. and Saturday, March 3rd from 9 a.m. to 5 p.m. at the Marriott. There is NO race day registration.